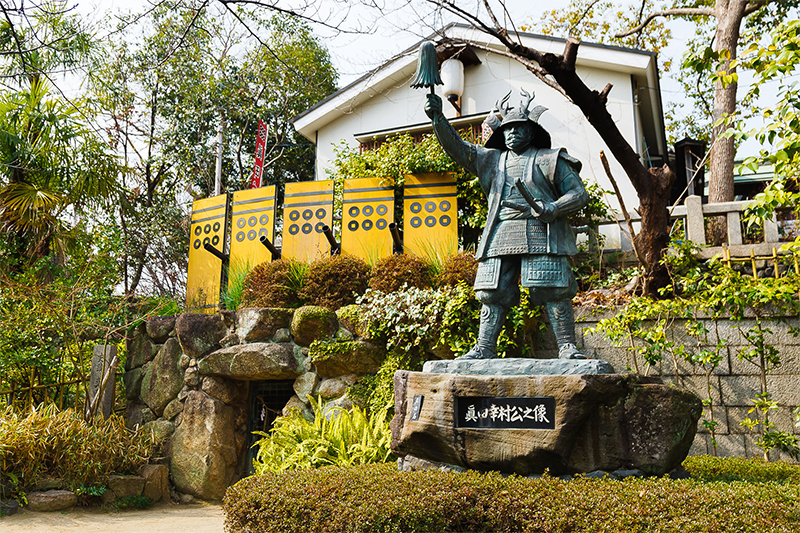 Inspired by the large-scale 2016 NHK drama “Sanada Maru”, the Sanada boom arose. Beginning with the remains of Osaka Castle’s branch castle built by Yukimura Sanada, there lie several scenic and historic places linked with Yukimura inside of Osaka’s Tennoji-ku. There are also plenty of other various historic remains. Let’s explore the historic spot of the Sanadayama Area! 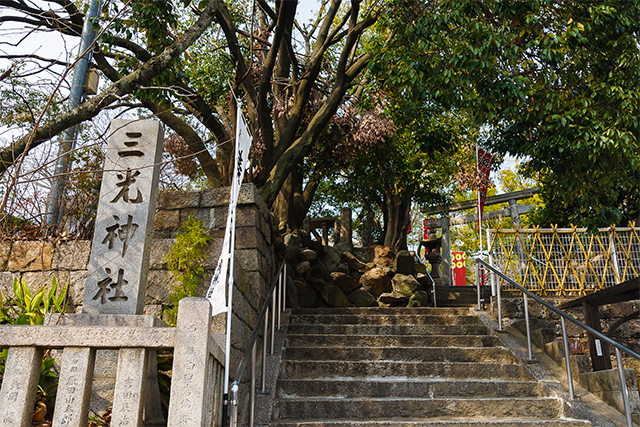 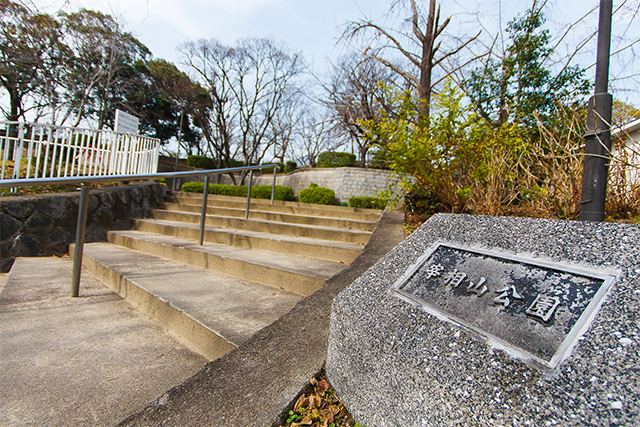 Sanko Shrine is a shrine located within Saishoyama Park in Tamatsukuri Honmachi​, Tennoji-ku, Osaka. It lies in a spot just 300m from JR Osaka Loop Line’s Tamatsukuri Station. Sanko began as a place to worship the gods Amaterasu Omikami, Tsukuyomi, and Susano no Mikoto. Known from ancient times as a shrine for the healing of palsy, a 7-day long festival of supplication is held each year starting June 1st. (※Palsy, or paralysis, is a condition caused by the after-effects of events such as strokes, in which parts of one’s body become paralyzed or numb and unable to move.) 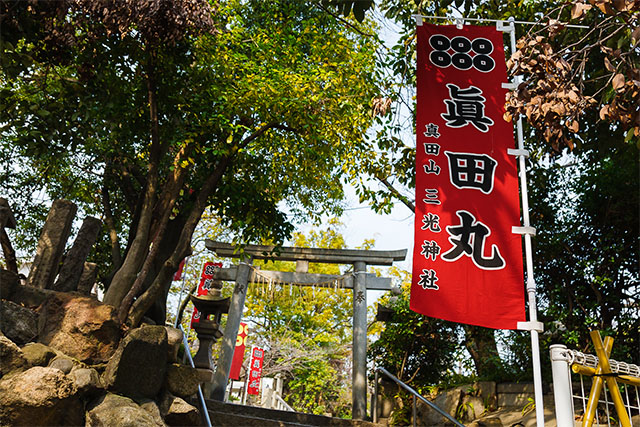 Sanada Maru is a place nestled within the southeast region of Osaka Castle. During the winter campaign of the siege of Osaka in 1614 (19th year of the Keicho period), the Osakan Yukimura Sanada set up camp here as a branch castle in order to fortify the southeastern weak point of Osaka Castle. In present times, this area is called Sanadayama. 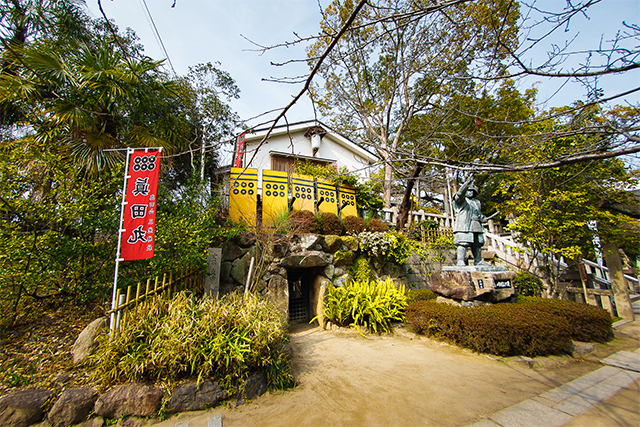 Within the grounds of Sanko Shrine, there lies an armored statue of Yukimura Sanada. It was erected in 1987 and the pedestal is said to utilize stones taken from the Sanada family temple in Shinshu Ueda.

Next to it is an underground passage said to have been built by Yukimura that runs below the land near the castle. It’s right next to the front shrine and super easy to spot. The underground passage that appeared in Manabu Makime’s novel Princess Toyotomi was inspired by this very passage. 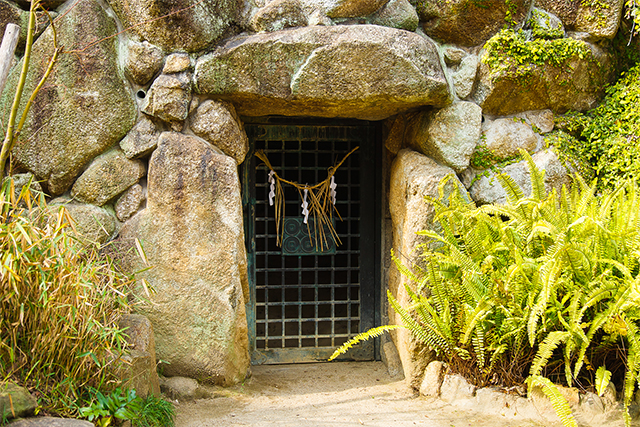 On the grating is the crest of the Sanada family – the Rokumonsen. (Rokumonsen is an ancient coin whose name stems from Buddhist teachings. With this coin, one could cross death’s river, and thus the Sanada used this as a message that they were not afraid of death in battle.)

On the first Sunday of every November when the Sanada Festival is held, the gates are opened and one can see inside.

The subordinate shrine inside the grounds is of Takeshiuchi Sukune who is one of Osaka’s seven deities of good fortune and is worshipped as the Shinto god of wealth and longevity, bringing in endless worshippers. 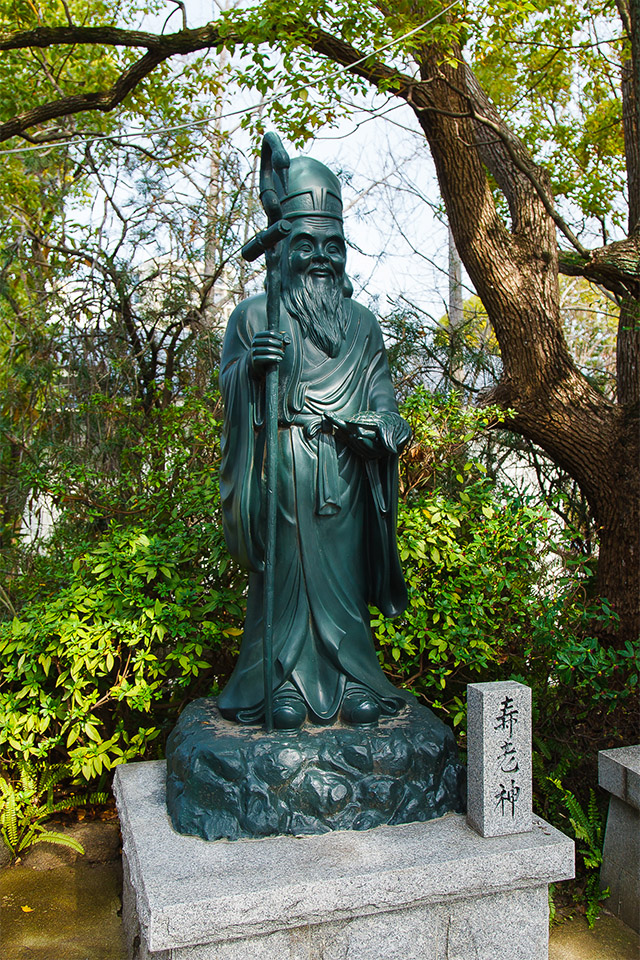 Sanko Shrine may be small, but it’s a tranquil place with a calming atmosphere. By simply imagining the statue of Yukimura Sanada on the small hill commanding his forces, you can feel an awe-inspiring sense of  a historic and adventurous spirit. 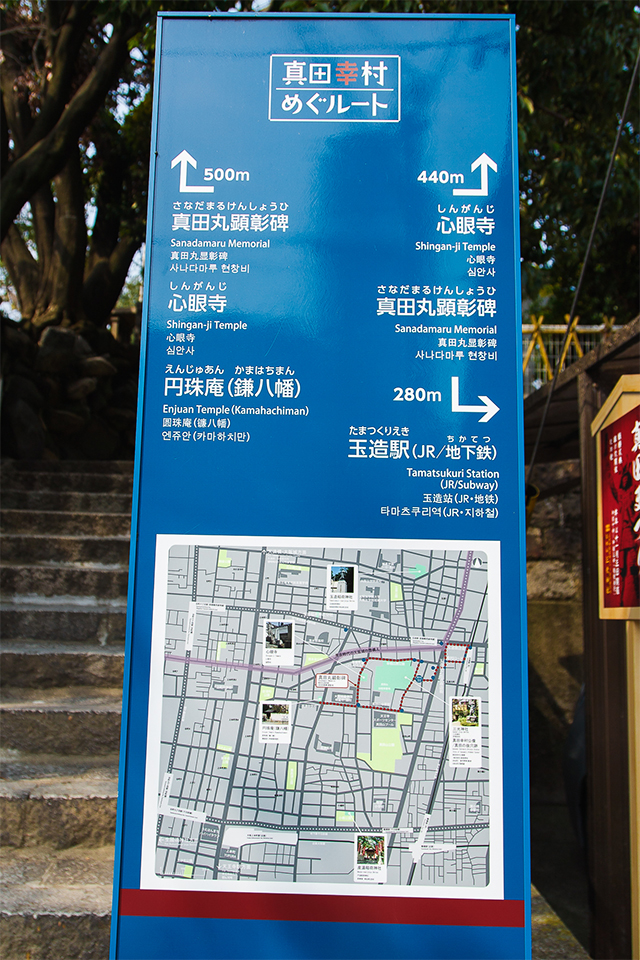 Tennoji-ku’s city hall has prepared a special “Yukimura Sanada Route” that you can follow to visit 11 historic sites connected to Yukimura. There are several spots nearby in which Yukimura Sanada was active, including Shinganji Temple, Enjuan Kamahachiman Temple, and Tamatsukuri Inari Shrine. For all you history buffs out there – be sure to pay a visit!

Currently, the Sanadayama Area is known as an ancient battlefield where Nobushige (Yukimura) Sanada was active in the winter campaign of the siege of Osaka. Actually, there are even some historic ruins in the northern side of Sanadayama Park that remain. That would be the Sanadayama Army Cemetery. 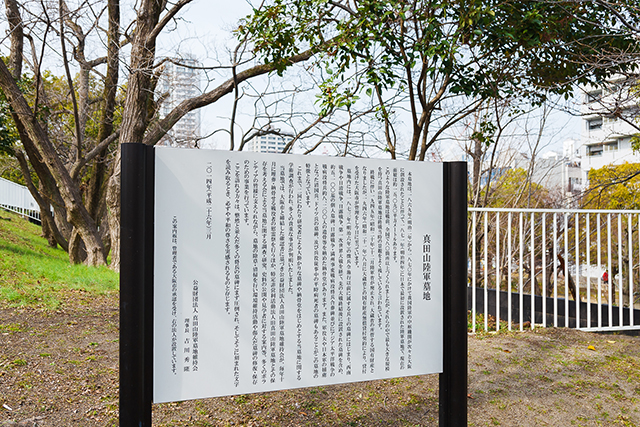 The army cemetery with tombstones neatly lined up. 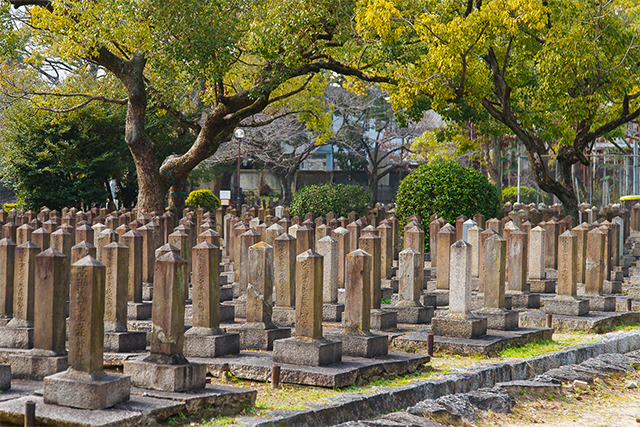 Established in 1871 (year 4 of the Meiji Period), it’s said to be Japan’s oldest Army Cemetery. Numerous fallen soldiers from wars like the Satsuma Rebellion, the First Sino-Japanese War, the Russo-Japanese War, World War I, and World War II are buried here. At about 177,000 square meters, this expansive cemetery appears to contain over 5,000 graves. I guess you could say this army cemetery is a place that condensed Japan’s modern history.

The above is the historic spot of the Sanadayama Area. It’s a place within Osaka where you can truly feel the weight of history. In spring, you can also enjoy the blooming of cherry blossoms at Sanko Shrine. As it’s close to Tamatsukuri Station, how about taking 1-3 hours to have a pleasant and leisurely historical stroll?